Why we chose Ontinyent, Valencia for our cycle retreat location?

If you want to know the best places to ride in Northern Spain or Valencia - including Alicante, Denia, Calpe and Jalon - there's a good chance we've been there, done the climbs, and visited the main attractions. Back in 2018 we had almost completed the purchase of a Hotel in Oviedo, Asturias, with a view to running it as a cycle retreat. We knew the area well having done multiple cycling trips and holidays to the region over the years, and the town is perfectly located for climbs such the Angliru and the Picos de Europa. When the purchase fell through, we regrouped and expanded our search to include other regions in Spain. Asturias is an an amazing place and equal to the Dolomites for beauty and splendour. As a cycling destination, the sheer number of climbs in one region is unparalleled, but it is a hard place to ride, with few easy options and many of the climbs are only doable by strong riders. It certainly is not beginner friendly and it's also a summer destination, due to cold and wet weather for much of the year. So we added the Valencia region to our search as it is known for 320 days of a sunshine per year. Over the following 6 months, we made multiple trips to Spain, staying in Asturias, Cantabria, the Basque Country, Girona, Valencia and Alicante. We saw approximately 200 properties in what are considered to be the best cycling locations.

It's not easy finding historic properties, in good condition, with eight or more bedrooms, close to a vibrant town (not a deserted village), with restaurants, shops, good schooling for our 4 year old daughter, and only 1-hour from an airport! We were also sticklers that the road to the property did not require a 4x4 or MTB. It also had to be set somewhere green and not arid like a Sergio Leone film. We'd ruled out Granada and Cabo de Gata on this basis.

Cantabria: one of the Spanish cycling heartlands that shares the Picos with Asturias, we had options in Potes, the Oyambre National Park and Cabezon de Sal.

Banyoles, Girona: we found a property overlooking Lake Banyoles, near the Rocacorba climb, shortly after Rocacorba has acquired a 17th Century Villa nearby.

After much hard work, many miles and endless viewings, we had our short list of potential properties. The location and property benchmark was already high and Valencia was now the last region on our list to visit. We knew Calpe and Denia from club cycling trips, but didn't want to limit ourselves to two towns, as we also knew the best cycling doesn't really start in either. We repeated our forensic research process, using Strava and maps of the mountains to chart every famous and less well known climb, to determine where might make the best base for a cycle retreat. There were two hotspots with the most climbs; Ontinyent and Alcoy, and so for two two weeks, we stayed in Alcoy and Pego (near Denia), from where we could visit everywhere including Calpe and Denia. We visited 4-5 properties a day, driving the best mountain roads in-between.

Our expectations for the region were not as high as they had been for other places we had visited. We'd gone to Girona with high hopes, as it is a well known cycling hub but left largely disappointed. We liked the town, but the quality of cycling itself was mixed, some was good, but often it was too spread out (especially for less able riders) and much of it nearby was flat, with high levels of traffic.

Our first excursions to inland Valencia and Alicante were a revelation. We found lush green National Parks, incredible mountains, perfect roads and zero traffic. There were few signs of the commercial tourism and traffic we'd seen in Calpe, Javea, Albir and to a lesser extent Denia. Aside from the traffic, we quickly ruled out Calpe and Javea, as they were too far from the best riding and offered much less variety. We're also not trying to compete with large hotels on the beach. The Jalón/ Xalón valley seemed a better option and we knew a few other other cycling guides and cycle retreats were based nearby. However, we found all of the towns (mostly villages) underwhelming, with limited or no facilities, restaurants and services. The business model that works for these locations would be a self catered villa or full service chalet, where guests take all their meals at the retreat. We specifically didn't want that model, as it didn't represent the kind of holidays we had enjoyed the most ourselves. We're foodies and explorers when we travel, so we also want the option to experience local culture, history, explore fantastic towns, sights and cuisine as well. There's no reason you shouldn't be able to do this on a cycling trip too. Denia as a town was better with a lovely vibe, but we'd really set out to find a place in the mountains and not the beach. Getting in and out of Denia was better than Calpe, but still not exactly fantastic. One of our favourites routes was the Vall de Gallinera and it is still 25 km from Denia to L'Atzubia before the nice riding really starts. That's 50 km of mediocre of riding.

Alcoy, City of Bridges, we enjoyed and it worked as a location, with its grand and historic centre and its setting at the foot of a mountain. However, it was twice the size of Ontinyent, the restaurants were spread out and not as good, getting in and out of the one-way system was tricky and whilst the riding was great, most of the immediate climbs were hard with the less choice of easy options. It's also at 650m, which would mean colder i.e. later starts in spring and winter and more climbing in the second half of rides. It was close enough to Ontinyent to enjoy its benefits without the downsides of being based there.

Initially we were blown away by the local terrain further inland, driving past the Maigmo National Park, Font Roja National Park and the Serra Mariola National Park, to find Ontinyent nestled in the Vall D'Albaida at 350m of elevation, on the border of Alicante and Valencia.

From a cycling perspective, it had everything. Multiple mountain ranges to the north, including the Serra Grossa and Serra Enguerra. To the south lay the Serra Ontinyent, Serra Mariola, Font Roja, Maigmo, Benicadell, Carresqueta and Aitana mountain ranges. To the west lay the so called "Tuscany of Valencia" with its rolling hills and the stunning wine region of Fontanars del Alforins. The Clariano river that runs through the town, east to the coast, leads you through to valleys of Albaida, its river and the beaches of Gandia that are only 45 minutes away. All of the regions well known climbs were ridable from the town, but best of all, the climbs and valley roads straight out of the town were all fantastic too. And there were LOTS of them, all traffic free and all perfectly surfaced.

Essentially, the riding is brilliant from the first kilometre and the number of climbs, types of climbs and riding that can be easily reached, clearly blows Denia, Calpe and Jalon away. We're still able to ride the classic cols, but there are places we can get to that simply can not be reached in a normal day's riding for many riders based on the coast. If you're on the coast, by definition, you have to head west inland to get to the mountain. We head out in every direction.The roads are simply better. There are more mountains, more national parks, more historic towns within a short ride than anywhere else in the region. It's also much drier in winter than the coast, as the climate shifts from mediterranean to steppe as you get closer to Albacete.

The area is a nirvana for MTB, road riding and gravel riding and the locals fully embrace it. The town is small with only 35,000 residents, but there's a high level of active riders of all ages and abilities, large cycling clubs, race teams and a few Spanish Pros. It would allow us to run training camps for seasoned athletes through to more relaxed riding, cycle tourism and sight-seeing, with a range of other activities too, not least the amazing hiking. There's even a world class Downhill MTB park nearby in Banyeres.

The town is not a tourist destination and had always been a working town, previously of great wealth, before many of the textile industries moved abroad. Today there's a mix of textiles, its own Bank of Ontinyent and a thriving small business community. As such, it's full of amazing high quality restaurants (that are much cheaper than those on the coast) and shops, that are open year round. DIsproportionate to its size and population, there are three premium bike shops (and several smaller ones) selling top of the range equipment, a 2nd division La Liga football team, one small 4* Hotel, an athletics stadium, olympic sized swimming pool, great cafes, a theatre, good supermarkets and importantly for us several ice cream parlours! Alongside these, is an array of small independent businesses such as fruiterias, butchers, fishmongers and florists etc. Much more than you'd expect given its size. 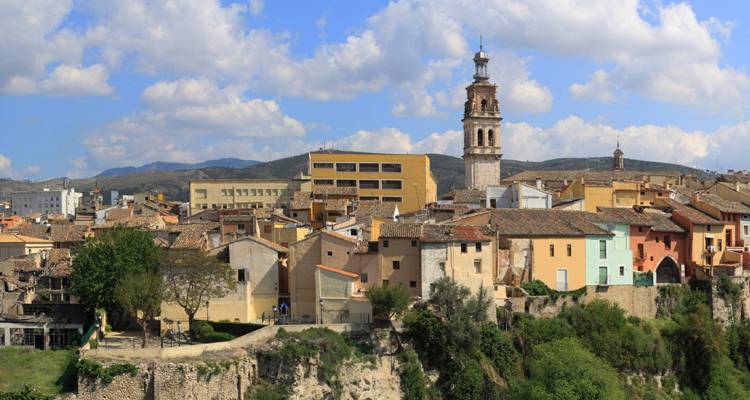 The old town is pretty, the new town is modern and there's a mix of everything in-between. The owner of Mercadona, Juan Roig (Spanish Billionaire), is from the town and remains a patron. In recent years, Swiss, Norwegian and British investors have moved into the region to develop the wine industry and it feels like a town on the up, with a strong sense of itself and a sense of belonging and pride in those that live here. 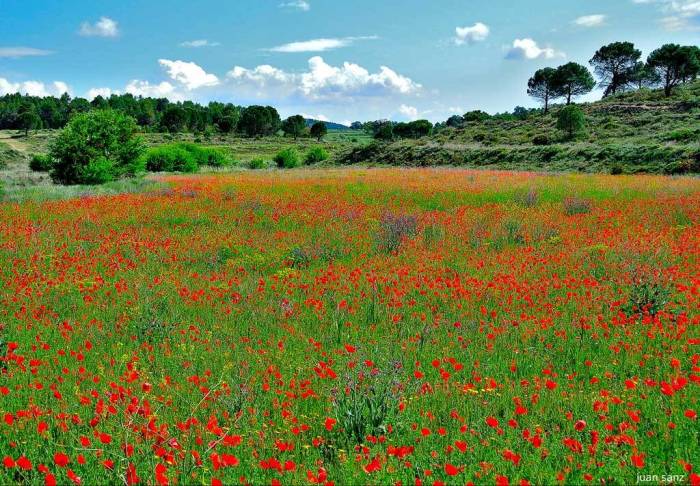 The modern history of town dates back to 1088, but much earlier settlements have been founded and humans have been in the area since Neanderthal times, with 10,000 year old cave paintings to be found in the region. Valencia sits on a massive aquifer which has always made it a fertile location conducive to growing pretty much everything. The main tourist attractions are the wines from Fontanars, the adjacent towns of Xativa and Bocairent (considered some of the prettiest in Spain) and Pou Clar, a local steep-sided gorge with its serious of fresh water mountain lakes and plunge pools, fed from the Serra Marriola. Many tourists visit the surrounding towns and historic castles, such as Xativa, Agres, Villena and Biar, and hiking in the parks is popular as is birding. There are eagles, owls, vultures, wild boar, deer, bats and unique fauna, multiple rivers and many peaks above 1000m. Most of the region's 1000m climbs are near here too. 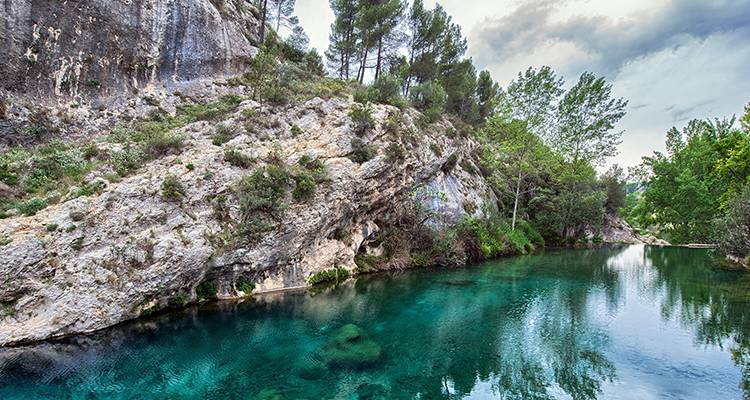 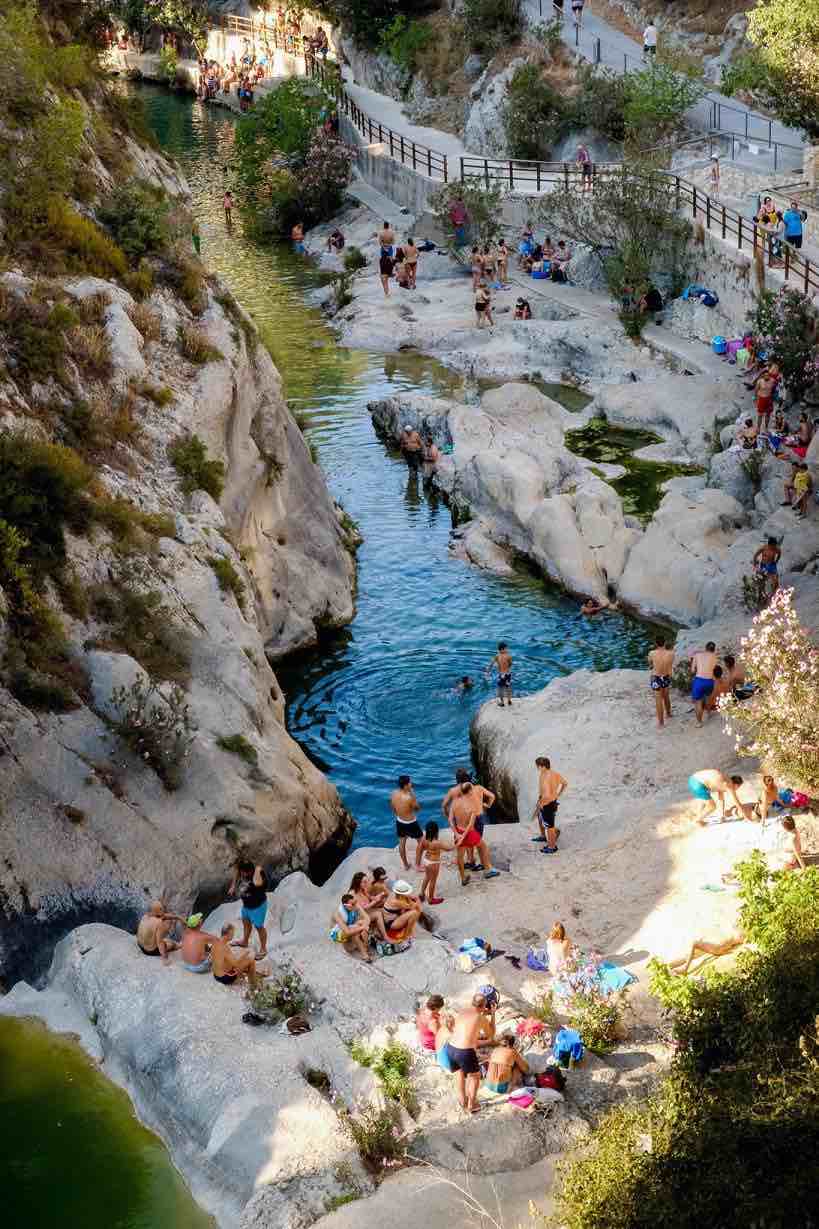 Our retreat, Casa Sanz sits on top of the Pou Clar gorge and is set in 21,000 square metres of private land, looking back into Ontinyent, with stunning views of the gorge, Ontinyent's 75m (the tallest in the region) bell tower, bridges and surrounding mountain ranges. It's a tranquil location, yet just over a mile away to the town. Since we've owned the property, it has been added to the list of historic buildings in Valencia and we're now on our way to converting it into a Casa Rural, but that's a story for a future article. We've been running for 18 months now and, prior to the COVID lockdown, business has been growing raidly. We've had guests visit who have been to Jalon, Calpe and Denia on previous trips and the feedback confirms that from a cycling perspective, it's a better place to base a cycle retreat if you're visiting this part of Spain! Our challenge now is to spread the word.

Joining the dots - nearby towns and onward routes